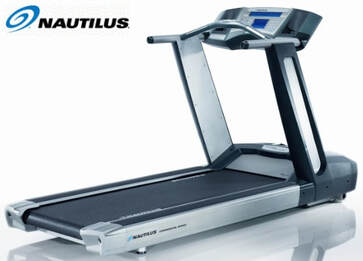 The super-sleek Nautilus T916
​Nautilus has to be one of the coolest brand names in the fitness market - but is it named after the Jules Verne creation of Captain Nemo's 'ahead of its time' submarine, or was it after the mollusk? Was it the innovative fictional marvel of engineering, or the humble sea creature that provided the inspiration?

Get on with it, I hear you say,.. but just to clarify, the company was actually named after the mollusk because the spiral cam used in one of their earlier models, named the Blue Monster, looked like a nautilus! See... now the logo makes sense - see right.

After its humble beginning in the 1960s, the company adopted the name, Nautilus in 1986, for reasons mentioned above. Following a number of buyouts, acquisitions and name changes, the company morphed into Nautilus Inc and now includes the well-known treadmill brands of Bowflex and Schwinn. Up until 2011, Nautilus focused purely on the commercial sector until switching to the growing home market. This probably accounts for their reputation for designing and manufacturing durable and reliable machines with features you'd usually find on a gym model.

The company is based in Vancouver, Washington.

If you're interested in the full history of the company, Wikipedia has the full story here...

Nautilus machines all come with some pretty hi-tech stuff. You'll get a good selection of workouts - at least 26, plus multiple profiles so up to 4 people can record their performance and progress over time.  And all Nautilus treadmills are covered by a good warranty of 10-years on the frame and motor, 3-years on mechanical and electronics, plus 1-year labor.